It is not possible to determine if the routine complaint Tippit and Hankins responded to at Club 80 was a disturbance by extremely drunk Leonard Garland or something else that actually brought the officers into the Club. (From maryferrell link, below.)

It is clear that the FBI was not seeking Garland before 1957, IOW, some months after his death, unless it was related to James’s reference to a Las Vegas crime investigation.:
http://www.maryferrell.org/mffweb/archive/viewer/showDoc.do?docId=10096&relPageId=125

Garland is buried in the state in which he was born, Arkansas.:
http://www.findagrave.com/cgi-bin/fg.cgi?page=gr&GRid=66566613

In a post on the “OswaldsMother” blog, George observed that the shooting of Leonard Garland was not investigated by the DPD.
(Death Certificate, no autopsy ) 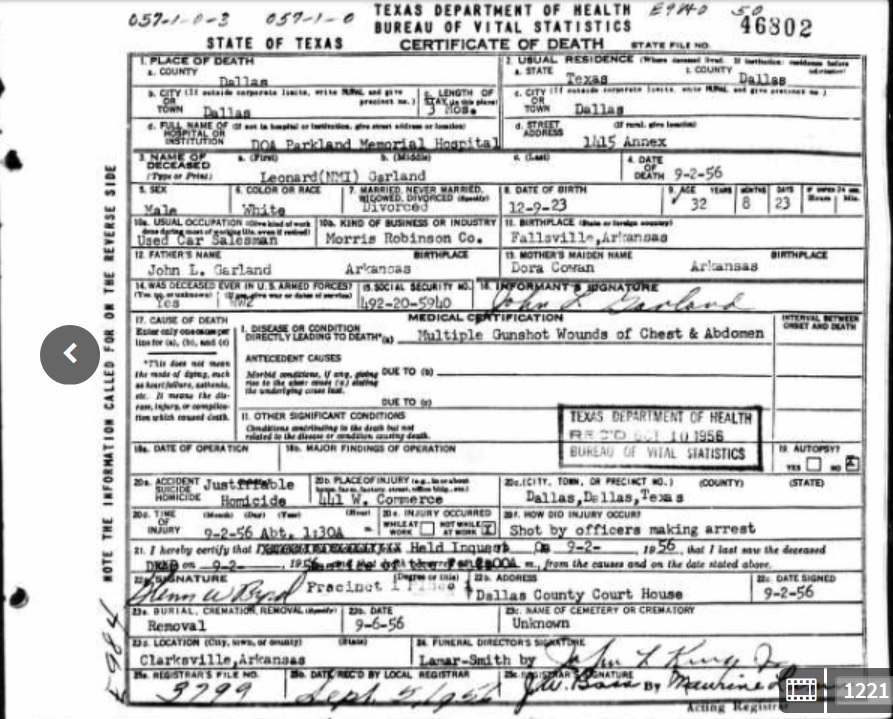 I can add that no autopsy was performed before Garland’s body was shipped to Clarksville, Arkanasas on  6 Sept., 1956.
The Dallas authorities recorded his birth year as 1923 but birth records indicate it was 1922
Garland was from a large family and the brother closest in age to him is buried here.:
http://www.findagrave.com/cgi-bin/fg.cgi?page=gr&GRid=99604866
(Exploring the “man exacts revenge for the death of his kid brother,” angle, as no one else has done it.)

There were at least one even older and two much younger brothers.